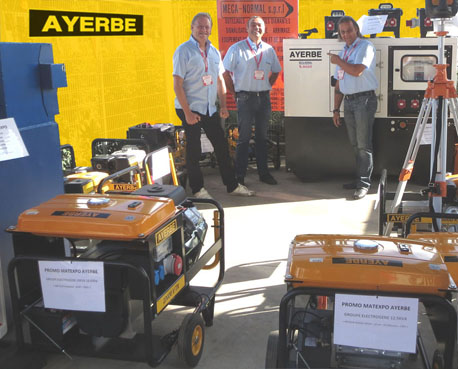 AYERBE INDUSTRIAL DE MOTORES, S.A., a generator manufacturer, just exhibited at the thirty-fifth edition of the MATEXPO international trade show which was held in Kortrijk, Belgium on September 4-8.
This event is considered to be the largest in Belgium in the construction machinery and materials sector. It is a very professional event and receives 45,000 visitors mostly from the BENELUX countries with 315 exhibitors and 132,000 m² of floor space.

AYERBE is continuing on with its exporting spirit in order to mitigate the decline in domestic sales. On September 18-21, it will exhibit at the BAUMA-AFRICA 2013 trade fair for the first time which will be held in Johannesburg. Luis Martinez de Albornoz, Export Manager of Ayerbe Industrial, tells us about this show that attracts visitors from English-speaking African countries in which we do not yet operate and intend to enter into the market since we already sell a lot of products in the French-speaking countries of Africa. This November, we will show at the BATIMAT-PARIS trade show which is the number 1 trade fair in the construction industry in France and which we have been participating in for the past eight years.

AYERBE INDUSTRIAL’s efforts and investment in foreign markets are clear, having managed to export to 46 different countries. The newest items that AYERBE will present are new generator models and improved soundproofing for our 1,500 rpm generators.